Common Digestive Complaints and How to Manage Them

These four conditions are common disorders of the digestive system in humans. Most can be managed with a combination of natural and prescription medication, as well as healthy lifestyle changes.

“We are what we eat” gets a new level of meaning when you consider that up to 70 million people suffer daily from digestive issues, according to the American Nutrition Association. Discover what the likely causes of your discomfort are, and what steps you can take to combat the problem naturally. Most disorders of digestive system in humans are caused by one of these four common medical conditions.

Gastroesophageal reflux disease (GERD) is a long-term condition that causes acid from your stomach to seep through a valve in your esophagus and travel upwards. This results in a burning sensation, which is also called heartburn. If this happens more than twice a week, you probably have GERD. Estimates from the National Institute of Diabetes and Digestive and Kidney Diseases estimates put the number of Americans affected by GERD at 20%, or one in five people.

In addition to the burning feeling in your chest, if you have difficulty swallowing or it feels like there’s a lump in your throat, you could have GERD. Sometimes it feels as if your food is coming back up, or a particular taste keeps repeating on you. Another less common symptom of GERD is a chronic cough. This can occur without any of the other usual GERD symptoms and usually happens when lying down at night.

The usual medical treatments for GERD are counterproductive measures, whether these are over-the-counter antacids, prescription H2 blockers, or proton pump inhibitors. While they may provide temporary symptom relief, they will worsen the condition over time.

GERD usually responds well to lifestyle changes. Reduce the amount of food you usually eat at each meal, and replace two or three large meals with five or six smaller ones. Avoid eating later than 3 hours before going to bed, and pause for the count of 5 between mouthfuls, particularly when you’re having both solids and liquids.

An autoimmune disease that resembles an intolerance for gluten, celiac disease affects one in every 100 people. It develops mainly in people who have a genetic likelihood of getting it, and has a high risk of complications such as heart disease, bowel cancer, diabetes, multiple sclerosis (MS), and other conditions. Celiac patients don’t suffer as much from digestive issues after eating as people with the other conditions listed, but overall the illness is a particularly unpleasant one. According to the Celiac Disease Foundation, the burden on the partner of someone living with celiac disease is comparable to caring for a patient with cancer, which is a lot more work than most disorders of the digestive system in humans.

There’s a difference between gluten intolerance and celiac disease, although many of the symptoms are similar. True celiac disease comes with bloating, nausea and diarrhea, and the inflammation causes the bowel to have difficulty absorbing nutrients. This leads to other illnesses.

The only treatment currently available for celiac disease is adoption of a strict, gluten-free diet, because even swallowing tiny amounts like the crumbs from a toaster can cause damage to the small intestine. Various medications can treat secondary illnesses, but the best approach overall is to avoid triggering an attack. If you suspect you have a gluten intolerance, it’s best to get a thorough test for digestive problems in case it turns out to be celiac disease.

Inflammatory bowel disease (IBD) is an umbrella term used to describe several inflammations of the digestive tract. The best-known of these are Crohn's disease and ulcerative colitis. Both of these show chronic inflammation of the gastrointestinal (GI) tract, which can cause colitis and have a major impact on your quality of life.

Patients with IBD show the usual signs and symptoms of digestive issues after eating, including

Inflammatory bowel disease is a chronic condition, and patients usually need treatment throughout their lives. Currently there is no cure for Crohn's disease or ulcerative colitis, which are the two main types of IBD. If you’re diagnosed with one of these conditions, your best bet is to make lifestyle changes that help you avoid triggering an attack.

Irritable bowel syndrome (IBS) is a common condition that affects around a sixth of the American population. Nobody understands fully yet what the cause of IBS is, but stress is known to be a frequent trigger. IBS-C is a form of IBS in which abdominal discomfort or bloating happens at the same time as constipation, meaning the patient passes stools less than three times a week.

Patients with IBS often have a wide range of different symptoms, but common ones are abdominal pain, bloating, and gas. Often, the patient experiences bouts of diarrhea between the constipation attacks, which causes an ongoing yo-yo cycle that disrupts their life.

Most IBS treatments focus on relieving the symptoms, but you can achieve improvements in your quality of life. There are tremendous benefits to be gained from detoxing your body regularly, by first fasting and then following a cleansing diet for a couple of days. Focus on eating a well-balanced diet with plenty of fiber, drinking plenty of water and exercising regularly.

Get more information on how to manage constipation and other disorders of the digestive system in humans, or try Dr. Garber’s Natural Solution for Constipation Relief. Our product uses a combination of biotherapies made from naturally-sourced materials, aimed at regulating sluggish bowel function and relieving occasional constipation. 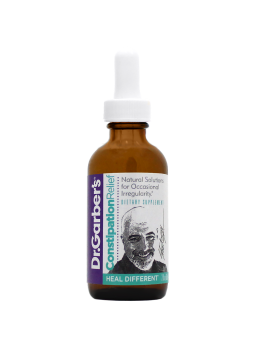