Exposure to the smoke from wildfires can cause tremendous problems with lung health, especially for patients who get asthma attacks. Here’s how to protect yourself naturally.

Toxic smoke from the wildfires burning across the U.S. have caused a high degree of air pollution to invade multiple communities. Statistics from the Associated Press show almost 100 million residents of 5 Western states have been exposed to these hazardous pollution levels. This has resulted in a spate of emergency room visits for poor lung health, as well as possibly thousands of deaths among seniors and the infirm.

The Risk to Humans

While safety from actual fire is the first priority for anyone in a wildfire zone, smoke is particularly bad for anyone who suffers from asthma attacks. That’s not the only problem with rampant fires, though. Anyone in the vicinity of a fire is also forcibly inhaling a whole range of other toxins that get released into the air when structures burn. Some of the compounds that cause additional risks to humans include synthetic building materials from houses and other structures taken by the flames.

Building materials give off a range of different types of gas, as well as tiny components of 2.5 microns or less. These are known as particulate matter or PM 2.5, and when people breathe them in they can cause real harm to the lungs and other organs. In addition, when trees and plants burn they release the carbon dioxide they have absorbed previously from the atmosphere, and it goes right back into circulation along with ozone, benzene and formaldehyde. Some of these chemicals remain in the atmosphere for several days, presenting increased risk to the lung health of anyone who inhales them.

For anyone with respiratory complaints, exposure to wildfire smoke can trigger a serious asthma attack in the short term. Over the long term, it can increase your risk for lung diseases such as chronic obstructive pulmonary disease (COPD) and cancer. People with existing lung conditions are more likely to develop complications associated with the pollution. Children and adults over 65 years are also more likely to experience negative lung health as a result of inhaling the air pollutants.

It’s usually not possible to sell up and move away when there’s a wildfire near your home, and anyway, chances are good wherever you go you’ll experience fires or other forms of air pollution at some point. Some ways you can minimize the risk of damage to your health on a day-to-day basis are:

These methods are helpful for anyone worried about being exposed to air pollution and the resulting health effects, whether it’s caused by fire or anything else. It’s also useful to check with your local governing body to find out if they are taking any additional steps to address the issue.

Few people want to take prescription drugs unless they have no alternative, so it’s an obvious choice to consider natural therapies for lung health before going the medical route. Some of the ways you can help your body fight the effects of air pollution include:

Natural health products like Dr. Garber’s Enviro Defense use biotherapy formulas that minimize the body’s reaction to pollution. The Enviro Defense helps you to combat your body’s reaction to inhaling allergens like pollen and animal dander, while Dr. Garber’s Lung Health protects your lungs and repairs tissues damaged by exposure to particulate matter, mold, bacteria and chemicals.

Wearing a face covering is an excellent way of controlling what you breathe in as well as out, as we’ve seen since the start of the Covid-19 pandemic. Masks can also help reduce the effects of smoke and other air pollutants, though, because the fewer particles you take in the less likely you are to develop lung inflammation.

A number of vitamins and minerals can help you fight the effects of air pollution, particularly Vitamins C and E, Beta carotene and Omega-3 fats. Vitamin C is a potent antioxidant that destroys free radicals and contributes to vitamin E regeneration, so it’s crucial for maintaining the lungs.

You can also make it a point to reduce other forms of pollution in your home by using environmentally-safe household products, keeping your car engine properly tuned, conserving electricity, and avoiding burning leaves or trash. Even if you experience a wildfire (or other pollution event), the levels won't be increased by the combination of pollutants around.

Please click here for more information on how to support your lung health during wildfires and other air pollutionevents, or to place your order for Dr. Garber’s natural health products. 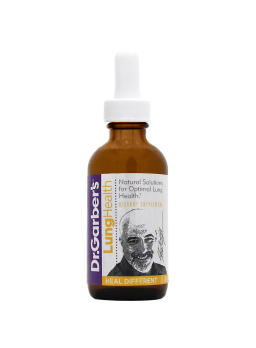 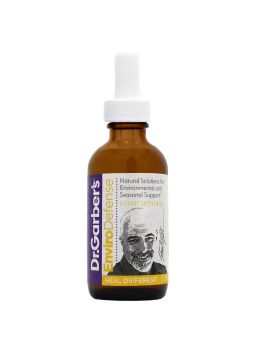